With the dust settled on the super fight we have all yearned for actually being made, let’s get down to brass tax.

Floyd Mayweather Jr vs. Manny Pacquiao is ON!

With the multitude of articles doing the rounds regarding Mayweather vs. Pacquiao, I decided to wait until a lot of peoples thoughts on the whole scenario were put out there.
Now that things have calmed down slightly, I will attempt to lay down my own twist on things.

Firstly, in this article, I will look at just how Manny Pacquiao, can beat Floyd Mayweather.

Manny Pacquiao (57-5-2) is very fleet of foot. Pacquiao can maneuver himself into great angles to throw an array of unorthodox punches from the southpaw stance. The speed and variety of the combinations with which ‘Pacman’ lets his shots go are the main threat to the unblemished record of Mayweather. It’s the shots you don’t see coming that will pose problems to any fighter.

I would have to say that this current version of Pacquiao is defiantly quicker on his feet than the present-day Floyd Mayweather. Manny Pacquiao still carries great hand speed. The quickness of Pacquiao’s hands will bother even the slickest boxers.

The main way Manny Pacquiao was always going to beat Floyd Mayweather, was to catch Mayweather with one of those hellacious left hands. ‘Pacman’ without doubt has the hand-speed and the foot-speed to put himself in position to land a flush shot on Mayweather, but the feared Pacquiao power no longer exists — well, certainly not at the true welterweight limit.

I believe that the Pacquiao power is still somewhat there, but not to an extent to pose a threat to the sturdy chin of Floyd Mayweather, and not at welterweight. Pacquiao has amazed many people by carrying his power as far through the weight classes that he has to this date. All good things, unfortunately, have to come to an end.

‘Pacman’ has been campaigning at welterweight for the past five or six years. Pacquiao’s last knock-out victory came against Miguel Cotto in late 2009. Though the fight was at welterweight, the bout was set at a catch-weight of 145 pounds. Manny Pacquiao had Cotto down in rounds 3 and 4. The contest ended with Pacquiao stopping a battered, bruised and bloodied Miguel Cotto, in the 12th and final round via TKO.

This certainly does not prove that the power is no longer evident, but it clearly makes you think that the ferocious ‘Pacman’ power has slightly declined (as I previously said, at welterweight) or has never carried up to the weight-class at all. However, they do say that in boxing, the last thing to go is the power.

With all the aforementioned and Manny Pacquiao having never claimed a victory via KO/TKO at true welterweight, does this mean that Pacquiao’s power is still there in abundance, but just not at the 147 weight limit — or is there something else surrounding the power issue?

I really can’t see Manny Pacquiao out-boxing Floyd Mayweather to win the contest on the scorecards. I think the only people who actually claim ‘Pacman’ can secure the victory are those thinking with their hearts and not their heads. I do however think the fight will end up a lot closer on the scorecards than most people will actually observe. Super-fights down the years, have a hell of a lot of controversy surrounding the bouts that come down to the judges decision.

At the end of the day, Floyd Mayweather is a naturally bigger, more skilful, super intelligent counter-puncher, with a ring IQ that can not be matched by anyone currently operating in the professional ranks. In short, a better version of Juan Manuel Marquez.

I firmly believe that the one and only way Manny Pacquiao can dethrone Floyd Mayweather is to knock Mayweather out cold. With the evidence we have to go through, it seems highly unlikely the outcome that the Pacquiao fans long to see will come true on May 2nd.

In my opinion, things do not look good for the congressman. 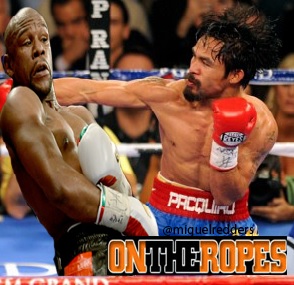 View all posts by: Michael Readman

20 Responses to "How does Manny Pacquiao beat Floyd Mayweather?"