“I saw the crowd behind me, my city was behind me,” said the 31-year-old Charlo, who made the fourth defense of his title and was fighting for the fourth time in his hometown. “I put them on my back. Career high in punches thrown? I still have more to come.”

As the best slots sites predicted, Charlo and Montiel both played an equal part in the electrifying main event that capped off a special Juneteenth Day boxing celebration. Charlo threw a career-high 769 punches, yet the gritty, relentless Montiel refused to go down. Instead, Montiel continued to walk forward despite taking incredible punishment, earning Charlo’s respect in the process for his guts and character.

“It took a real warrior to get in the ring with me,” Charlo told SHOWTIME reporter Jim Gray following the bout. “He fought each and every round as hard as he could and I could tell by his eyes that he’s a true warrior from the beginning and he wanted to fight. It didn’t matter what I hit him with, he wanted more. I love that spirit. He’s going to be great.” 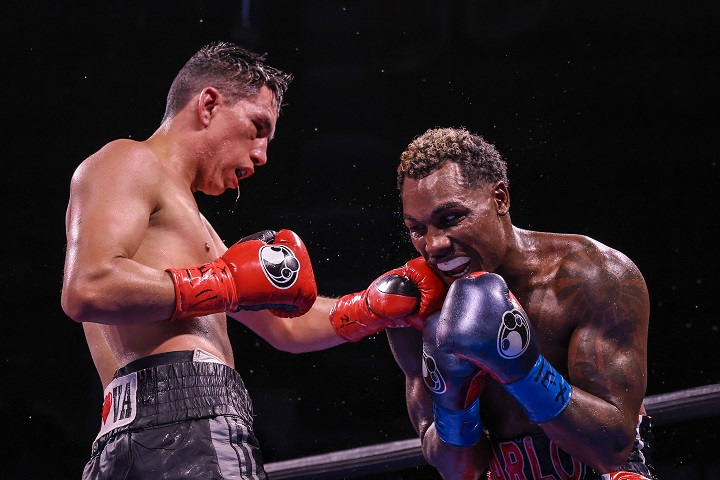 Charlo landed more than twice the amount of punches as Montiel (258-127), including a career-high 201 power punches. Montiel miraculously survived a grueling sixth round, despite being on the receiving end of 36 punches landed, a majority of them thrown with malice behind them.

In the eighth round, Charlo suffered the first cut of his career as Montiel continued to return punches and opened up a gash over Charlo’s right eye. Still, Montiel was far out-classed in terms of boxing ability and athleticism. Despite being unable to close the show in front of the raucous hometown crowd, Charlo displayed his well-rounded game, using a variety of punches to deliver shot after shot on Montiel.

“I needed an opponent of this strength to show what I’m made of,” said the 27-year-old Montiel. “I know with this experience, later on down the line I will become a world champion. I love to fight. I know that I have the passion and I have what it takes to become world champion. I needed to go down this road.”

“What can I say? I’m elated,” said Cruz. “This was exactly the kind of fight we expected. ‘Bandido’ was crafty and fought his fight, that allowed him to stay on his feet until the 10th round. Lots of embracing, but we knew how to manage it.”

Cruz, who shot up the lightweight rankings in 2020 and punctuated his year with an electrifying first-round knockout over Diego Magdaleno in September, came out early looking for a similar result. Cruz continued to throw power punches, including his signature overhand right, but Vargas was able to avoid any devastating blows. It was the 36-year-old Vargas who was the more active fighter, throwing 586 punches compared to Cruz’s 548. However, Cruz out-landed Vargas 188-148 and landed 43 percent of his power shots en route to the victory.

“We proved to be in top shape, our conditioning paid off,” Cruz continued. “I think fans were happy, because this is what all of Mexico and the Toyota Center wanted to see. I think Vargas held on to me more than he’s used to and couldn’t put on the show he usually does, and we couldn’t counter that. However, I value the fact that I learned that lesson.”

Cruz consistently led with his head, resulting in a number of head clashes, including in the eventful 10th and final round which led to a significant cut over Vargas’ right eye that the Mexican warrior fought through. In the final minute of the fight, Cruz sent Vargas to the canvas for just the second time in his career with a barrage of punches, topping off an impressive performance. Watch the knockdown HERE: https://twitter.com/ShowtimeBoxing/status/1406446541313921024?s=20

Albuquerque, New Mexico’s Leo, who fights out of the Mayweather Promotions stable, impressed the judges by holding a 200-175 edge in power punches landed and by connecting on 85 body shots compared to just 15 for Alameda. In the all-action affair, the two combatants combined to land 402 punches and were within 20 punches landed of each other when the final bell rang.

“The fans spoke, and they make the best judges,” said Alameda, referencing the loud boos that rained down after Jimmy Lennon Jr. announced the judges’ decision. “I felt like I won tonight, I think people saw it that way too even if the judges didn’t. Maybe the fact that he was the champion and the favorite coming in played a role in the decision, but I felt like I did what was necessary to win that fight and felt really good throughout.”

Leo, who dropped his WBO belt when he lost a decision to unbeaten Stephen Fulton Jr. in September, successfully began his re-ascent to another world title opportunity. Despite the loss, Mexico’s Alameda proved that he belongs in the upper echelon of the red hot 122-pound division.