“The crowd was expecting a big brawl, but that’s not the way this fight needed to go tonight,” said Porter. “The style that we used left the fight close. As the clock ticks, you have to do what’s working. Tonight the foot movement was working and it made Ugas have to reset.”

“I showed tonight that I belong with the elite fighters at welterweight,” said Ugas. “All I can say is that I’m ready to fight any of the top names in the division. I’ll be back.”

The early rounds were defined by Porter using his jab to try to cut down the distance, while Ugas worked power shots and jabs to the body. Porter had some success on the inside landing on Ugas’ chin during flurries, but was unable to hurt the Cuban.

In round five, both men stood in the center of the ring for an extended period of time throwing power punches that had the crowd on their feet. Ugas began to work cleaner on his counterpunching as the fight went on, and Porter focused on movement while trying to snap his jab.

“I was on my toes all night,” said Porter. “I was very focused the entire fight and just listening to my corner. We wanted to out box him and eventually turn it on and press him. But my dad did not think that was the smartest way to win the fight. We fought this way for 12 rounds and no one has ever seen that from me before.” 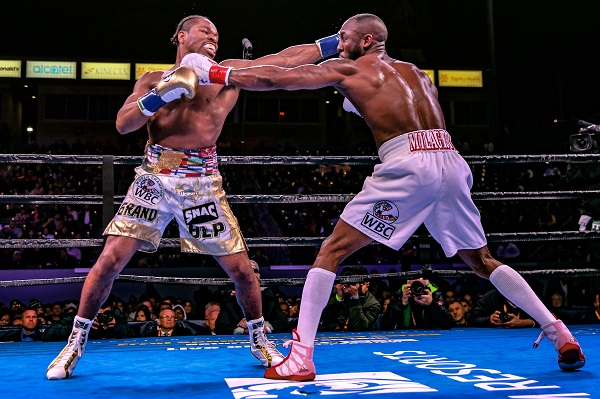 Porter’s activity clashed with the sharp countering and body punching from Ugas. According to CompuBox, Porter was more active on a per round basis, throwing 42.9 punches per round to 37.4 from Ugas. Ugas held the advantage in body punches landed at 57 to 34, while the two fighters each landed 79 power punches.

In round 10 Porter began to bleed from his right eye due to an accidental head butt, but late in round 11 he landed one of his most significant punches of the fight when he backed Ugas up with a left hook to the head. After 12 rounds, the judges’ scorecards reflected that there were numerous close and hard to score rounds as all three judges agreed on only the fourth and ninth rounds, which went to Ugas and Porter respectively.

“We fought a good smart fight tonight,” said Porter. “I was consistent and I thought we won a majority of the rounds. We got the win, we’re still champion and we’re looking forward to what is next.”

Santana struck first, landing a clean left hook that put Ramos on the canvas late in the second round. Santana had been stalking Ramos around the ring for much of the early action, before catching him in a neutral corner for the knockdown.

“He caught me on a flash knockdown in the second round,” said Ramos. “I didn’t see the punch coming and he caught me a little bit off balance. As soon as I got up, I was good.”

Both fighters were effective in mixing up their attacks, although it was Ramos that held a 138 to 46 advantage in jabs landed, per CompuBox. Santana’s power punching caused Ramos to begin bleeding from his nose in round six, but in round seven Ramos connected with a flurry of shots that appeared to have Santana temporarily out on his feet.

Santana was able to survive the round, but was then out landed 56 to 26 over rounds eight and nine. Both fighters pushed forward in a 10th and final round that saw them land a combined 68 punches out of 224 thrown. Despite the early knockdown, Ramos was awarded the decision on all three scorecards by tallies of 98-92, 97-92 and 95-94.

“I was very surprised by the scorecards,” said Santana. “I thought I did enough to win. It was very competitive but I was landing more significant punches. I knew he was a warrior who would come back to fight after the knockdown. I don’t know what else to do at this point, but I’ll always keep my head held high.”

“I thought I won the fight,” said Ramos. “I landed more punches. I felt like I was landing all night and I was doing good clean work throughout the fight.”

Ajagba was dominant from the outset, knocking Mansour down twice in the first round. He first landed a clean straight right to Mansour that caused him to tumble to the ground. He got to his feet but was then put onto the ground by a straight left from Ajagba.

“I’ve never fought a southpaw in the pros before,” said Ajagba. “Ronnie Shields has taught me a lot and given me the plan on how to fight a southpaw and how to use my right hand against them.”

Mansour made it to the second round but continued to take a beating as Ajagba landed flush to the head consistently. After the round, referee Thomas Taylor took a long look at Mansour in his corner decided to call the fight after two rounds.

“I want to be the best heavyweight in the world,” said Ajagba. “That’s my dream. I’m going to go home and work hard and prepare for the next fight.”