LAS VEGAS (August 22, 2021) – In a career-defining fight, Yordenis Ugas shone bright on the biggest of stages.

A boisterous crowd of 17,438 at T-Mobile Arena in Las Vegas watched the underdog Ugas outbox and out-fight the great Manny Pacquiao to win a 12-round unanimous decision and retain his WBA Welterweight World title in the main event of FOX Sports PBC pay-per-view.

“I’m very excited but, most of all, I want to thank Manny Pacquiao for giving me this moment in the ring today,” Ugas said afterward. “I told you, I am the champion of the WBA and I showed it tonight.”

“I’m very emotional. A lot of people say Cubans can’t win the big fight. So, I’m very proud that I got this win for Cuba and showed what we are all about.”

Pacquiao, as always, was gracious in defeat.

“Congratulations to Ugas and his team,” said Pacquiao. “Thank you to all of you. I want to thank all my fans and the media. For many decades, the press, media and boxing fans were always behind us, supporting us. That’s why we’re here, why we became popular and why we accomplished our dreams as a fighter.

“I am a fighter outside and inside the ring. I look forward to returning to the Philippines and helping them during this pandemic.” 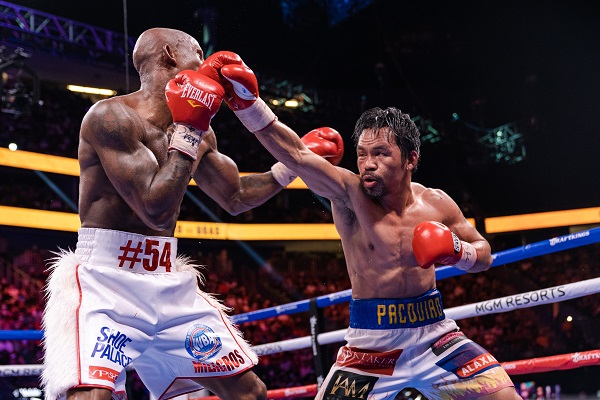 Ugas used his size, strength and length to keep Pacquiao guessing, slowly wearing down boxing’s only eight-division champ to win in decisive fashion.

Pacquiao, 42 (67-8-2, 39 KOs), promised a fast start and lived up to his word in the first, darting in and out with combinations. Unfazed, the 35-year-old Ugas (27-4, 12 KOs) maintained a tight guard. In the second, he unveiled his long left jab, alternating it up and downstairs as Pacquiao struggled to get inside.

Pacquiao began the third with a short left but Ugas silenced the crowd with power shots of his own. The Cuban began landing a looping right in the fourth, a punch Pacquiao struggled with the entire night.

Following a close fifth, Ugas regained the upper hand in the sixth, working the jab and delivering well-placed punches to the body. Two-way action brought the crowd to their feet in the seventh as they shouted “Manny! Manny! Manny!” Ugas remained poised, pushing the Philippine Senator back with more rights.

“My trainer, Ismael Salas, and I had a plan,” said Ugas. “We were going to move him around; we were going to use the jab and keep him off balance. That was the whole game plan.”

Ugas controlled the eighth, and the raucous audience responded to more punishing rights by Ugas. Sensing the fight slipping away, Pacquiao picked up the pace in the ninth. Still, the harder shots came from Ugas.

Early in the 10th, a Pacquiao left forced Ugas to clinch. The momentum was short-lived. Ugas had now found a home for his right and was throwing it with regularity. The 12th was particularly one-sided. Ugas repeatedly landed the right, hurting Pacquiao on several occasions and opening a cut near his left eye.

“The right hand was a shot I had planned to use on Manny,” said Ugas. “It kept working so I kept using it.”

The triumphant Ugas raised in his arms in victory as the bell sounded. Moments later, three judges scored the bout in his favor, one turning in a 115-113 card while the other two had it 116-112.

“In the future, you may not see Manny Pacquiao in the ring,” Pacquiao said. “I don’t know. Let me rest first, relax and make a decision if I’ll continue to fight or not.”

“He’s a legend, one of the greatest fighters that ever lived,” Ugas said of his opponent. “I’ll always respect him not only as a great fighter but outside the ring. I also admire that he fights for his country, as I do. I want to free Cuba.”

“It felt good to be back in the ring with fans and I definitely fed off of their energy,” said Guerrero. “I knew this was going to be an all-out war. Victor Ortiz brought the best out of me tonight. It was back and forth action the entire fight and I came out on top as I predicted.”

Much of the action was fought on the inside where Guerrero landed the cleaner shots. After a feel-out opener, Guerrero came alive in the second, stunning Ortiz with a series of power shots.

Round after round, the two former world champions unloaded short shots in close quarters with each refusing to take a backward step. Guerrero capped off his performance with a strong 10th frame, which proved to be the difference on the cards.

“I thought I won. It is what it is,” said Ortiz. “It was a close fight. He didn’t hurt me. A couple times I got caught off balance but that was it. I should have boxed a little better, but hey, he did what he had to do.”

“Now I’m ready to step up and fight anyone they put in front of me,” said Guerrero. “I have a lot left in me and I’m in this sport to win another world title. I dedicate this fight to my family and I give all the glory to my lord and savior Jesus Christ.”

In a star-making performance, Mark “Magnifico” Magsayo (23-0, 16 KOs) of the Philippines scored a spectacular knockout of Julio Ceja (32-5-1, 28 KOs), putting the former world champion away in the 10th round of their WBC Featherweight Title Eliminator.

“I just worked a lot on the straight punches,” said Magsayo. “I kept working it round after round and when I saw he was hurt, I followed up.

“I’m so glad for the outcome. I expected his style to make it happen and I expected a knockout tonight.”

It looked like it might be an early night when a counter left hook from Magsayo floored Ceja in the first. Mexico’s Ceja gamely rose and worked his way back into the fight, slowing Magsayo down with combinations to the ribs.

Ceja’s work paid off late in the fifth when a left uppercut introduced Magsayo to the canvas. The 26-year-old slugger made it to his feet. The bell sounded moments later.

Ceja attacked the body with abandon in the sixth and seventh but it was Magsayo who found his second wind late. His fast hands and feet allowed him to dictate the action in the eighth. He enjoyed an even better ninth, flashing his left in the forms of jabs and hooks.

With the fight seemingly hanging in the balance, Magsayo let it all hang out in the tenth. As Ceja sought refuge along the ropes, Magsayo uncorked a picture-perfect one-two flush on the Mexican’s jaw. Ceja sagged to the mat, helped along the way by another right. No count was needed. Referee Kenny Bayless ended the bout at 0:50 of the 10th round.

“I got knocked down and was surprised, but I focused my mind on what I wanted, a world championship shot,” said Magsayo. “It’s my dream today and now it’s coming true. Hopefully my next fight is a world title shot.”

In the pay-per-view opener, Carlos Castro (27-0, 11 KOs) turned in the finest performance of his career, stopping former world title challenger Óscar Escandón (26-6, 18 KOs) in the 10th round of their back-and-forth featherweight encounter.

“Escandón has been in there with the best. He’s gone a lot of rounds with world champions,” said Castro. “But it was just a matter of time, picking our punches. I sat down a little more on my shots. I’ve been with Manny Robles for only four months. With a little more time, I think we’ll be able to dominate the division.”

Castro used his height and reach to keep Escandón at bay early on. Escandón was game throughout. Late in the first, he pinned Castro against the ropes and buckled him with a hard left hook.

“I knew it was going to be a slow start,” Castro said. “Manny Robles taught me a lot, but a year and a half out of the ring, a new coach—it’s always different. Sparring and training is always different from fights, so I feel great and happy for the opportunity. I have to keep progressing.”

By the start of the second, Castro was back to using his jab and timely footwork. His punch output increased with each passing round.

Escandón began to show signs of wear in the fifth. Castro was now landing to head and body with regularity. Early in the seventh, Escandón was badly wobbled by a right hand. Castro pounced, unloading a series of power shots. Escandón countered with a wild left hook that missed. The force of the blow drove Escandón to the canvas. Referee Celestino Ruiz improperly ruled it a knockdown, which was later overturned and ruled a slip.

Castro sought to close the show but Escandón showed incredible heart, fighting him off until Castro was forced to retreat. The crowd roared their approval at round’s end.

Castro continued to dominate in the ninth. He closed the show in the tenth, landing another big right followed by a volley that floored Castro. Ruiz mercifully waved it off at 1:08 of the 10th round.

“I fought my heart out and gave my best effort, but it just wasn’t my night tonight,” said Castro. “I had him hurt in the first round, but I didn’t have enough time to finish him off. I give Castro a lot of respect, he’s a great fighter and showed great sportsmanship. I’m not done and I will be back.”

“What’s next is up to my promoters,” Castro said. “I’m going to take some time off to spend time with my family, thank my coaches and enjoy the victory.”

The 26-year-old Martin dictated the pace from the opening bell, working behind a southpaw jab and stepping in with combinations. Kielczewski was game but had no answer for Martin’s speed, power and athleticism.

In the co-main event on FOX, heavyweight prospect Steven Torres (5-0, 5 KOs) made quick work of Justin Rolfe (6-3-1, 4 KOs), pounding Rolfe until referee Robert Hoyle stepped in at 2:33 of the first round of their scheduled four-round bout.

In the FOX televised opener, touted lightweight Jose Valenzuela improved to 9-0 (6 KOs) with a fourth-round stoppage over Donte Strayhorn (12-4, 4 KOs).

The 22-year-old Valenzuela scored a knockdown early in the first when an overhand left sent Strayhorn staggering back. Referee Raul Caiz Jr. ruled that the ropes held Strayhorn up and administered a standing eight count.

In the second, Valenzuela showed poise as he pressed the attack behind his lefty stance. Strayhorn had his moments in the third round. However, the heavier blows came from Valenzuela, who poured it on until the bout’s end at 1:29 of the fourth round.