LAS VEGAS (Sept. 13, 2015) – Floyd “Money” Mayweather performed one last masterpiece on Saturday live on SHOWTIME PPV® in what he insists was the final fight of his distinguished 19-year career.

Following the final bell, Mayweather dropped to his knees in reflection of his final act.
“You have to know when to hang it up,” he told SHOWTIME’s Jim Gray in the ring afterward. “I’m knocking at the door; I’m close to 40 years old.

“I’ve been in this sport 19 years, been a world champion 18 years, broke all the records. There’s nothing else to prove in the sport of boxing.

“My 49-0 record is a part of boxing. Records are made to be broken. Hopefully someday we can find the next Floyd Mayweather.

“Now it’s time to spend time with my family and children, make sure they get the proper education. I also want to help the fighters under the Mayweather Promotions banner. 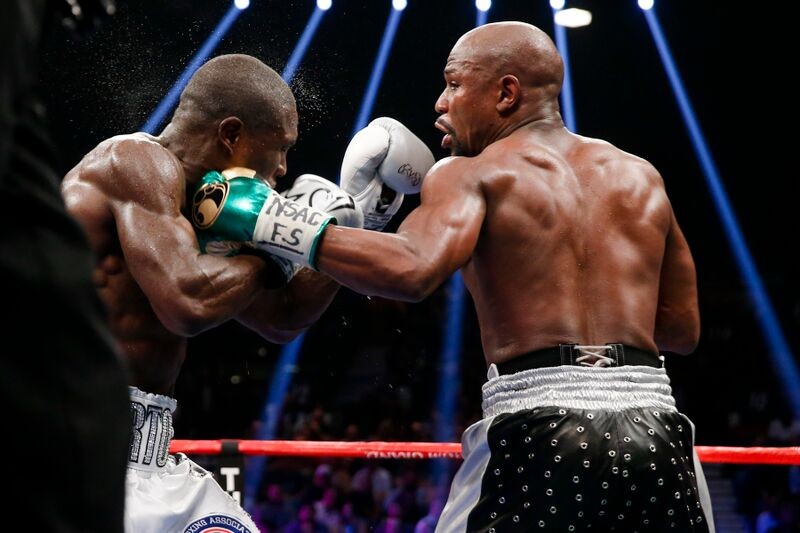 “I’m leaving the sport with all my faculties; I’m still sharp and smart. I’ve accomplished everything in this sport, there’s nothing else to accomplish.

“I don’t want to rank myself, but I am the best at boxing.

“I want to thank all the fans that came out to support this event. For 19 years I wouldn’t be able to do it without these fans.

“Andre Berto has heart, a tremendous chin. He wouldn’t lay down, it was a good fight. He was a tough competitor, but experience played a major role tonight. What can I say? I was the better man tonight. It doesn’t matter if I hurt my left or my right hand, my career is over. It’s official.”

Berto was satisfied with his performance, but conceded he was not at Mayweather’s level.

“Experience played a big part in this fight,” he said. “I want to thank my entire team, my family and all of Haiti that is watching.

“I was in shape for this fight; he was just difficult to hold on to. He’s slippery. I used a lot of speed but he’s real crafty. He was using little things to get me off my rhythm.

“A guy like me has a lot of pride. I told him that every time I caught him with a good shot that I was here to stay. I put on a great performance, pushed him to the limit. But, we fell short.”

In the second of two world title fights on the pay-per-view undercard, Roman “Rocky” Martinez (29-2-3, 17 KOs) retained his WBO Junior Lightweight title with a thrilling 12-round majority draw in a rematch against four-time world champion Orlando “Siri” Salido (42-13-3, 29 KOs).

Picking up where they left off when they fought in a Fight of the Year candidate last April, won by Martinez, both fighters exchanged punches for 36 minutes of ferocious action. Each went down in the third round. At the end of a slugfest, in which more than 1,700 punches were thrown, one judge scored it for Martinez (115-113), one had Salido (115-113) in front and the other called it even (114-114). 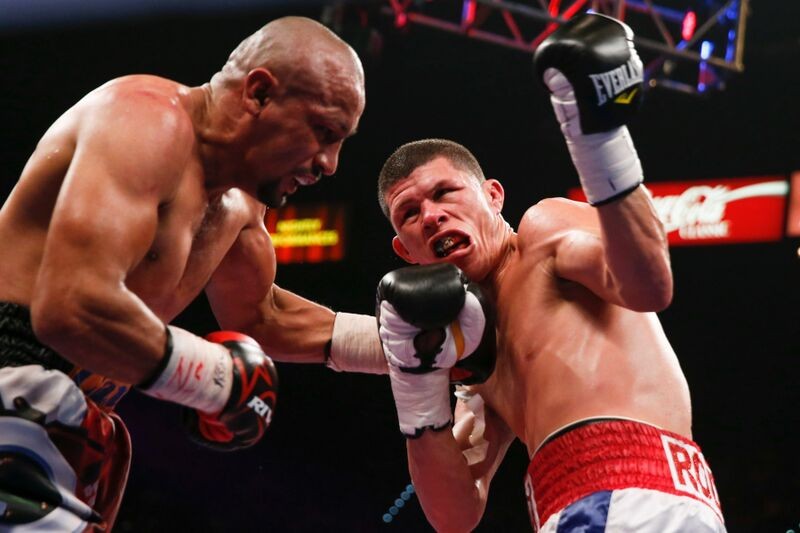 Both Martinez and Salido thought they should have got the decision and are in favor of a third fight.

“I definitely won the fight,” said Martinez, who was making the first defense in his third stint as WBO Junior Lightweight World Champion. “They counted a knockdown that wasn’t really a knockdown.

“He threw a lot of punches but most of them didn’t connect, they landed on my arms. Anywhere you want that third fight between us, I will take it.”

Said Salido, a two-time featherweight world champion who was the aggressor throughout and delivered more than 1,000 punches, “I did all the work and I thought I won the fight. I thought the first couple of rounds were even but then I took control of the fight afterwards.

“I was definitely looking for the championship. As you all saw I threw more of the punches and I thought I won the fight.

“I dedicated so much for this fight, for them to take it away from me is not fair. Definitely, I am ready for a third fight.”

In another world title fight, Badou Jack “The Ripper” (20-1-1, 12 KOs) successfully defended his WBC Super Middleweight World title with a hard-fought, crowd-pleasing 12-round majority decision over mandatory challenger “Saint” George Groves (21-3, 16 KOs). Jack, who dropped Groves late in the first round, triumphed by the scores of 116-111, 115-112 and 113-114. The hard-luck Groves, who abruptly fled the ring in disbelief after the announcement, fell to 0-3 in world title fights.

Jack was impressive in what may have been his toughest fight to date.
“Groves has a lot of heart,” said Jack, who was making the initial defense of the WBC belt he took from Anthony Dirrell in April.

“Body work is becoming my signature. I wasn’t effective enough because I couldn’t knock him out. I felt like after the first round I could but I just couldn’t. I didn’t go to the body enough. 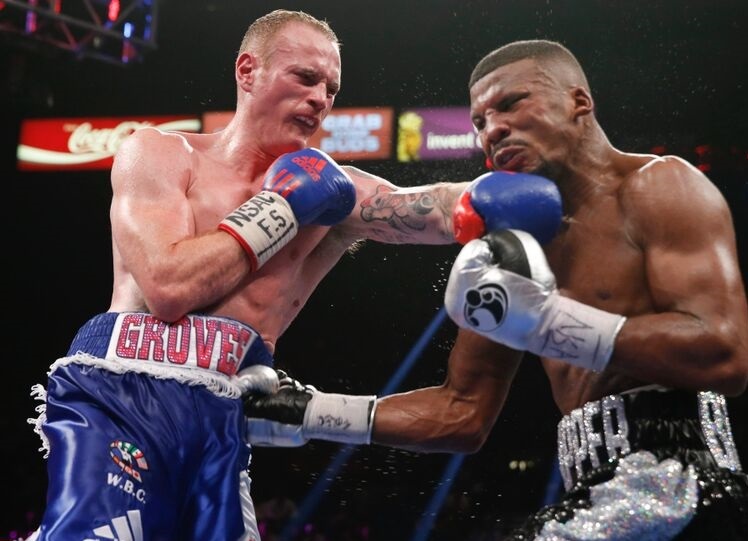 “I haven’t thought about my next fight yet, but there’s a lot of big fights for me. I heard Julio Cesar Chavez Jr. wants to fight me. I want to enjoy this win but I will fight anyone.”

The victory was Jack’s fourth in a row since suffering the lone loss of his career on a shocking first-round knockout loss to Derek Edwards in February 2014.

Groves, whose only other losses were in back-to-back fights against then-world champion Carl Froch, didn’t dispute the knockdown but had a problem with the decision.

“I thought I won the fight decisively,” he said. “I thought I controlled the fight with my jab and that I was in control throughout, though, it appeared closer to the judges.

“Congrats to Badou. I hope he has a successful reign as champion. I’d love to fight him again and hopefully I will do better next time. I am going to take some time to work out what’s next. Losing a world title fight is the worst feeling in the world.”

Puerto Rico’s Jonathan “Polvo” Oquendo (26-4, 16 KOs) overcame a first-round knockdown, scored a knockdown of his own and upset former two-division world champion Jhonny Gonzalez (58-10, 49 KOs). Oquendo won a 10-round majority decision in a good action fight that opened the pay-per-view telecast. Oquendo won the biggest bout of his career by the scores of 95-93, an out-of-line 98-90 and 94-94.

For Oquendo, the victory in his sixth appearance at MGM Grand Garden Arena was the 12th in his last 14 fights. 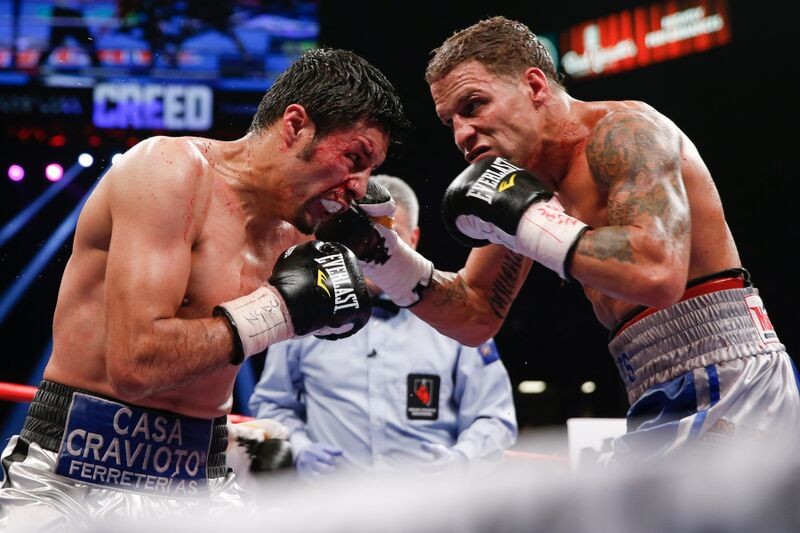 “I feel very happy,” said Oquendo, who was dropped by a left hook with about one minute left in the first. “Jhonny Gonzalez is a great champion. I knew I had to throw a lot of punches and work to get inside to get the victory. I was able to implement that game plan tonight.”

Gonzalez, a former two-time WBC featherweight and WBO Bantamweight World Champion, was displeased with the scoring as well as all the unintentional headbutts. He was dropped by a straight right hand at about the 2:00 mark of the second.

“The judges favored him too much,” Gonzalez said. “He kept head butting me. It just didn’t go well. As soon as he knocked me down, nothing happened. I just got right back up.”

In a fight Saturday that aired during “COUNTDOWN LIVE” on SHOWTIME before the pay-per-view telecast, longtime junior middleweight contender Vanes Martirosyan (36-2-1, 21 KOs), of Glendale, Calif., scored two knockdowns en route to winning a 10-round majority decision over former IBF 154-pound champion Ishe Smith (27-8, 12 KOs) of Las Vegas, by the scores of 97-91 twice and 95-95.

“I feel awesome. I worked hard and it paid off. I hadn’t seen my family in 10 weeks. I was in training in the Bay Area,” Martirosyan said. “Ishe was eating 100 jabs a round. I knew he was a Mayweather fighter and I was going into the fight already down five rounds. 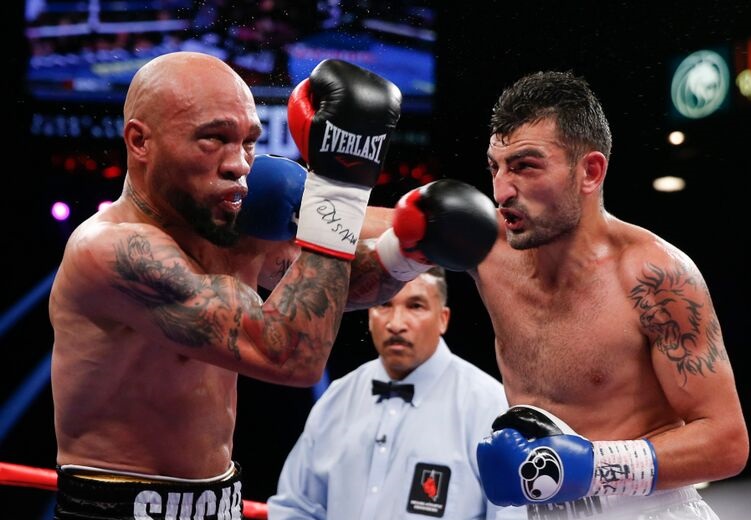 “I knew I had to win. My corner told me to go in and have fun, but I wanted to knock him out.

“I knew as soon as I landed the first knockdown that I had to keep going. I didn’t think he would get up from the second knockdown. He had never been dropped before. He has fought a lot of great fighters and I dropped him twice.”
Smith, the first native Las Vegan to capture a world title, felt the fight was much tighter.

“The first knockdown wasn’t serious. He just caught me in the back of the head. The second one was legit, but I got up ready to come back at him,” Smith said.

“Six points is ridiculous. I thought it was closer to 95-95 or 95-94. I just thought it was a lot closer than those two judges, and my corner kept telling it was real close. But we expected a tough fight out of (Martirosyan). He’s long, rangy and a good puncher, but that’s why I wanted to get inside and fight him there.

“I just fought a hell of a fight against the No. 3-ranked fighter in our division. I have a lot left. I’m pushing these guys to the limit. I take nothing away from him. He’s one of the best in the world and I’m a former world champion. We gave the fans a great fight tonight and I’ll be back again soon.”

“HIGH STAKES: Mayweather vs. Berto,” a 12-round welterweight world championship bout for Mayweather’s WBC and WBA 147-pound titles, was promoted by Mayweather Promotions LLC. The event took place Saturday, September 12 at MGM Grand in Las Vegas and was televised by SHOWTIME PPV. The undercard featured a WBO Junior Lightweight World Championship fight, which was a rematch between Roman Martinez and Orlando Salido. Also featured on the PPV telecast was a WBC Super Middleweight title bout between Badou Jack and George Groves, which was promoted in association with Team Sauerland. The opening PPV bout pitted former world champion Jhonny Gonzalez against Puerto Rico’s Jonathan Oquendo in a 10-round super featherweight bout. SHOWTIME “Countdown Live” included a 10-round super welterweight showdown between Ishe Smith and Vanes Martirosyan.